Learn about supported MT providers and their usages.

As the name implies, machine translation (dubbed as MT) is the translation performed by a computer program or, more precisely, a neural network. MT is a great tool to translate simple texts or pre-translate your strings.

Please note that Lokalise doesn't alter source translations and sends it directly to the MT providers for processing and then fetches the result. Therefore be aware that after performing such translations your tags or placeholders may have corrupted or misplaced brackets. In rare cases such corrupted placeholders might even break your code.

Google translate is probably the most popular machine translation provider out there. It supports dozens of languages, and translations from any language to any other language are available.

On Lokalise, Google Translate can be used:

DeepL is a deep learning company that develops artificial intelligence systems for languages. Currently it supports more than than 20 languages and different language combinations.

On Lokalise, DeepL can be used:

Microsoft Translator is a part of Cognitive Services and supports dozens of languages.

On Lokalise, Microsoft Translator can be used:

There are multiple ways of employing machine translations on Lokalise.

Inline machine translation feature is available starting from the Essential plan and above. This feature provides you with suggestions from MT engines as you edit your translations via Lokalise graphical user interface: 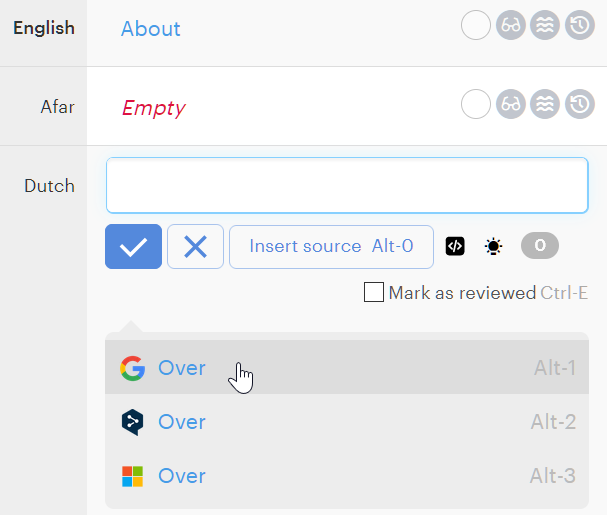 In the screenshot above the user is being presented with the suggestions by Google Translate, DeepL, and Microsoft. To pick one of the suggestions, simply click on it, or press Alt+N key combination where N is the suggestion number.

Note that the chosen MT values will also be saved to your translation memory for future use.

You can enable or disable inline MT providers in your personal profile under the General tab.

Starting from January 2022, all suggestions are displayed in the right pane by default:

However, you can adjust this behaviour and make then appear underneath the editor like it was done previously. To control where the suggestions should be displayed, proceed to your profile, open the General tab, and toggle the Display in side panel option:

This feature is available starting from the Essential plan and above. If you would like to populate all empty values for a given key with machine translations, click on the Google-translate empty values button under the key name: 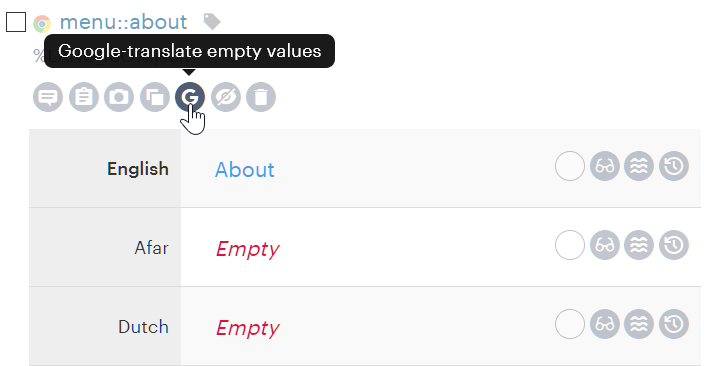 As the name implies, this feature will always employ the Google Translate provider. If some languages are not supported by this provider, the corresponding empty values will be left intact. If you would like to provide machine translations for multiple keys in one go, you will need to create a new translation order.

Please note that you cannot google-translate empty values for all keys withing the project. To achieve that, you should create a new translation order as explained below and choose Google as the provider: 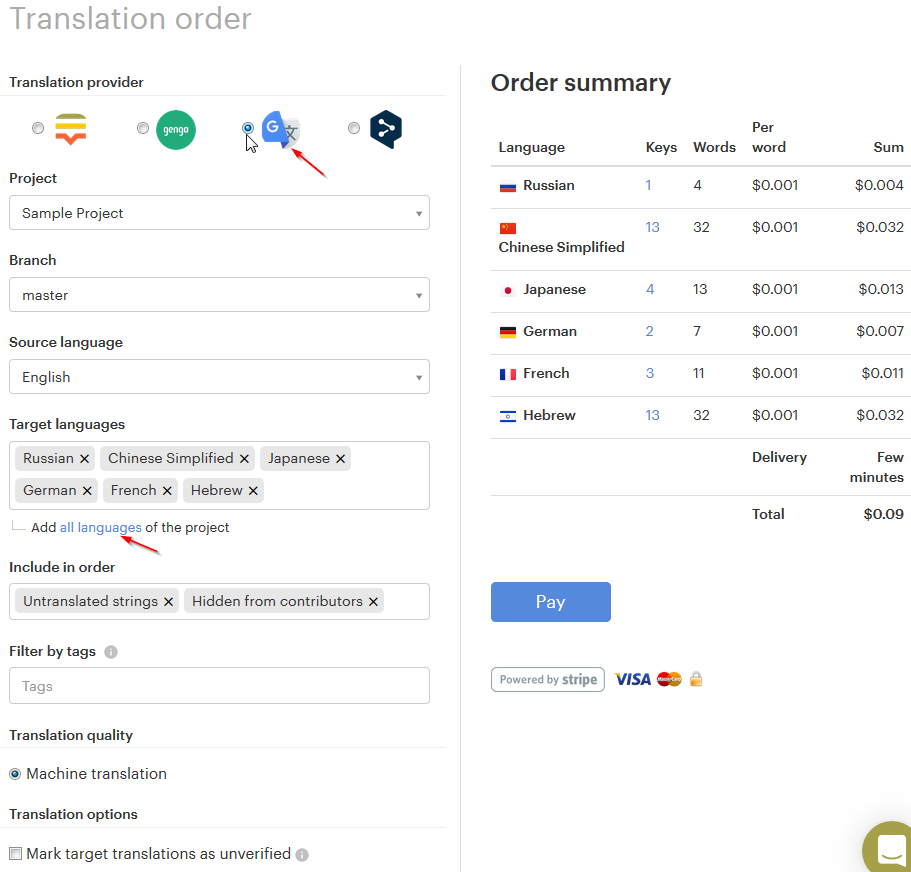 To create a new translation order, click on the Orders button in the left menu:

Then click New order and choose a translation provider:

If you would like to order a machine translation, choose either Google Translate or DeepL providers (the last two). MT services are much more cheaper ($0.001 per word) but, at the same time, the final result might not always be accurate.

Then choose your project, the source and the target languages (please note that certain languages might not be supported by the chosen provider), and choose which keys to include in the order. You will be presented with the order summary and the total price: 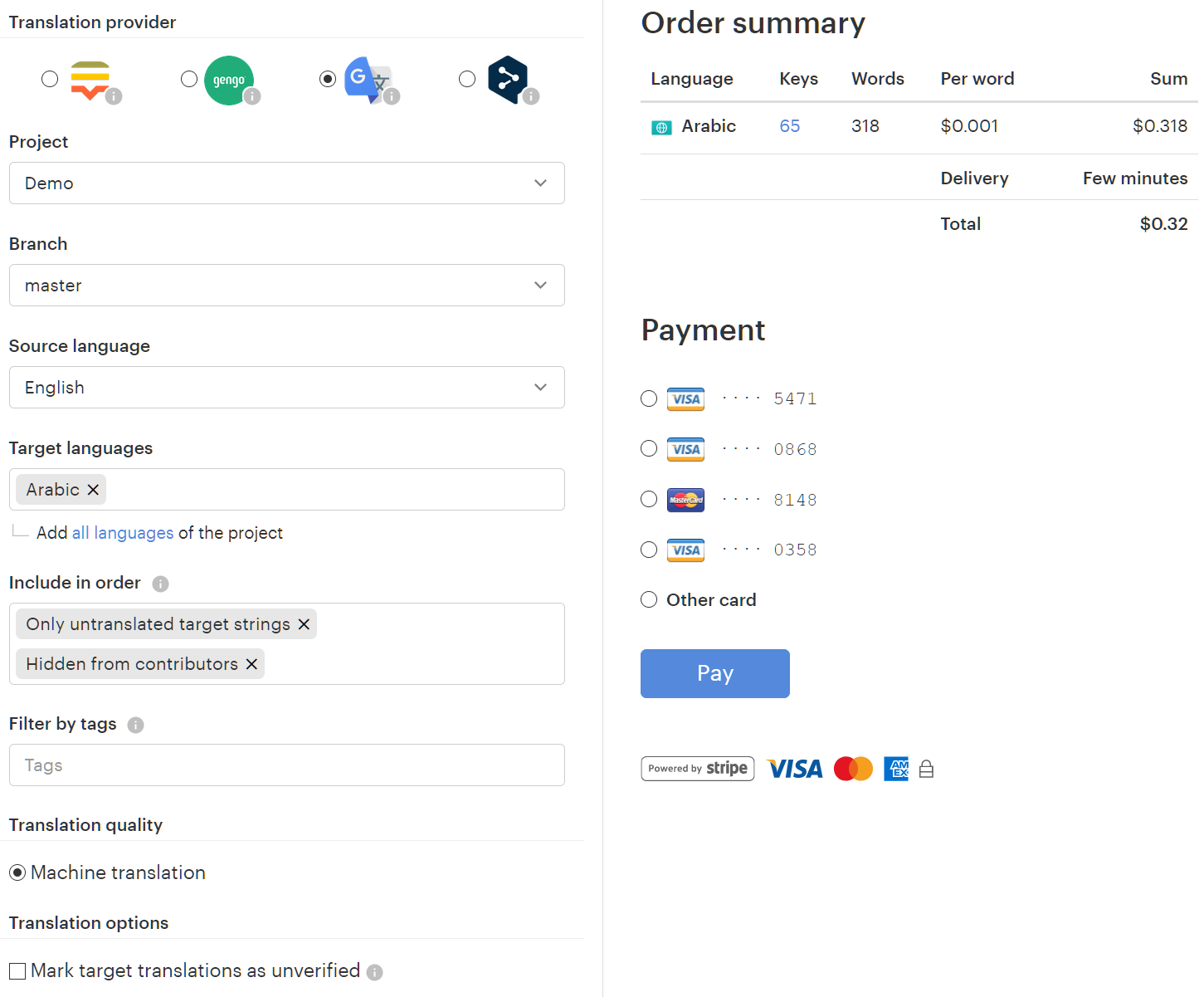 It is also recommended to enable the Mark target translations as unverified option so that your linguists double-check the translations generated by the neural network.

To create a new automation rule, click on the More button, choose Settings and proceed to the Automations tab.

Automations provide many different actions, and one of the actions is Use machine translation. The available providers are Google Translate and DeepL. This action is very convenient when you would like to automatically translate a string once it was modified. To learn more about setting up automations and the MT quotas, please check the corresponding article.

Many languages can have regional specifics: for example, English is spoken not only in Great Britain, but in the US, Australia, and some other countries. How these specifics are handled by the MT?

Languages are mapped progressively, starting from the language itself and going further to the region if the MT provider supports these more specific languages.