Create translation and review tasks for project contributors and keep track of their progress.

Tasks are created in the project scope to translate or review the chosen keys by one or more contributors.

There are two ways to create a task.

First, you can select multiple keys in the editor by ticking checkboxes next to their names and then choosing Create task... from the bulk actions menu. This will open the task creation page with a predefined task scope, limited to the keys you have just selected. 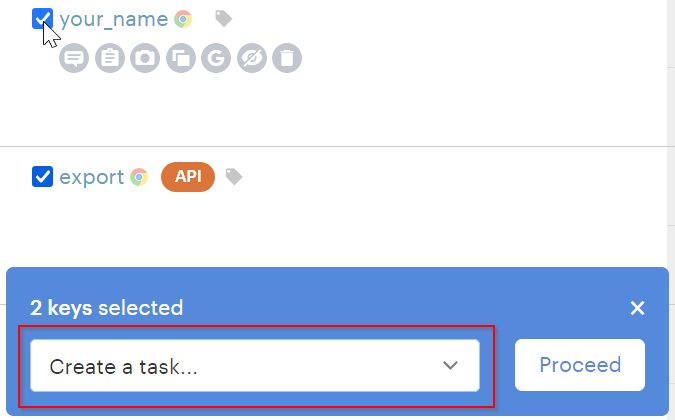 Alternatively, open your project and proceed to the Tasks page:

Click Create a task to open the task creation wizard.

After clicking Create new task, you will be presented with the following screen: 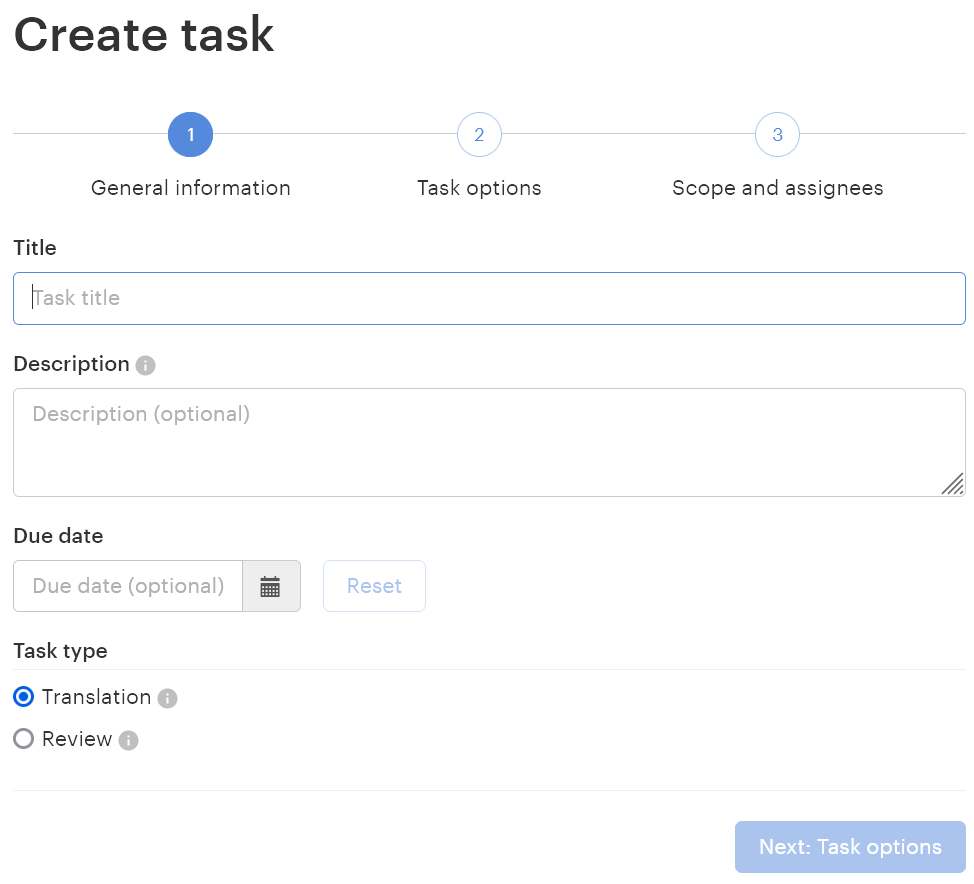 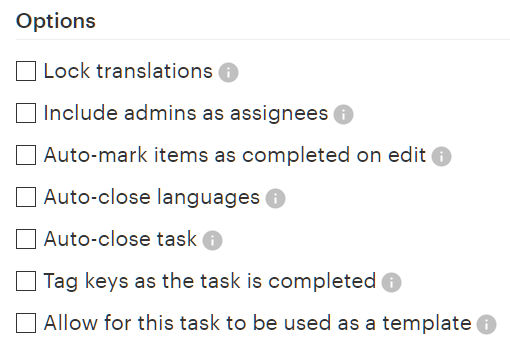 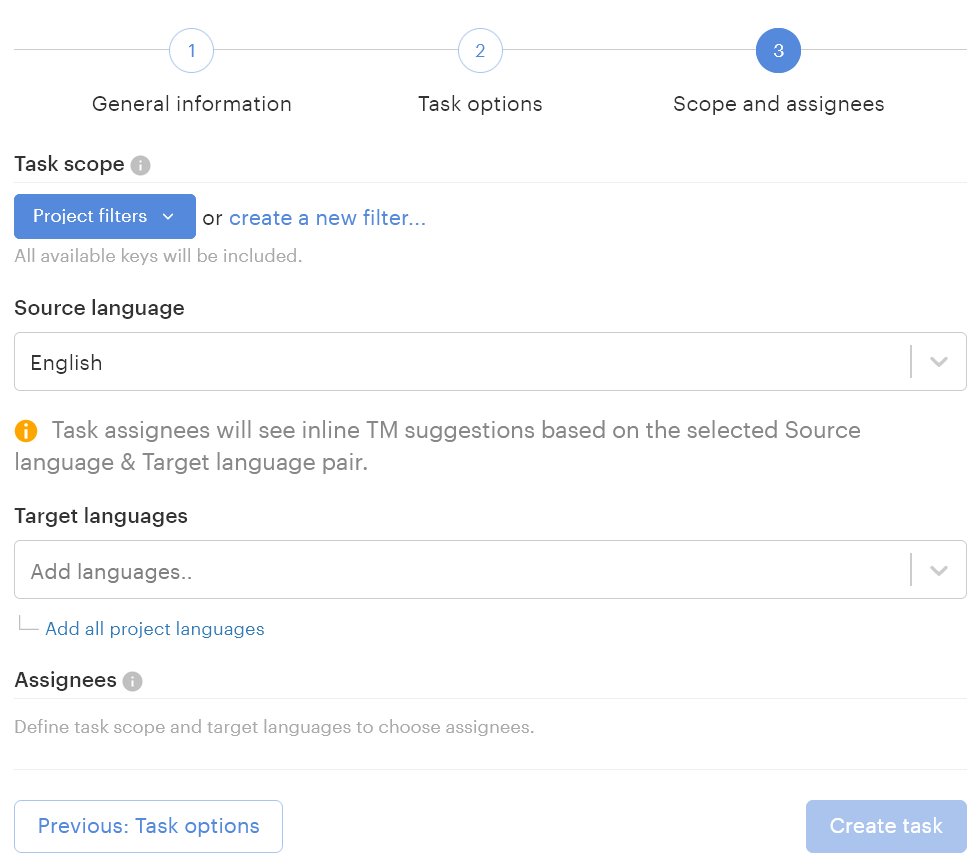 A couple of things to note when changing the task source language:

Finally, once you are ready, press Create task. All assignees will be notified about a new task assigned to them.

The newly created task will be displayed on the Tasks page:

To speed up the process of creating typical tasks, you can utilize templates. These are regular tasks but with a special option allowing them to be used as templates.

In order to create a template, proceed to the Tasks page and click New task. Fill in General information as usual: 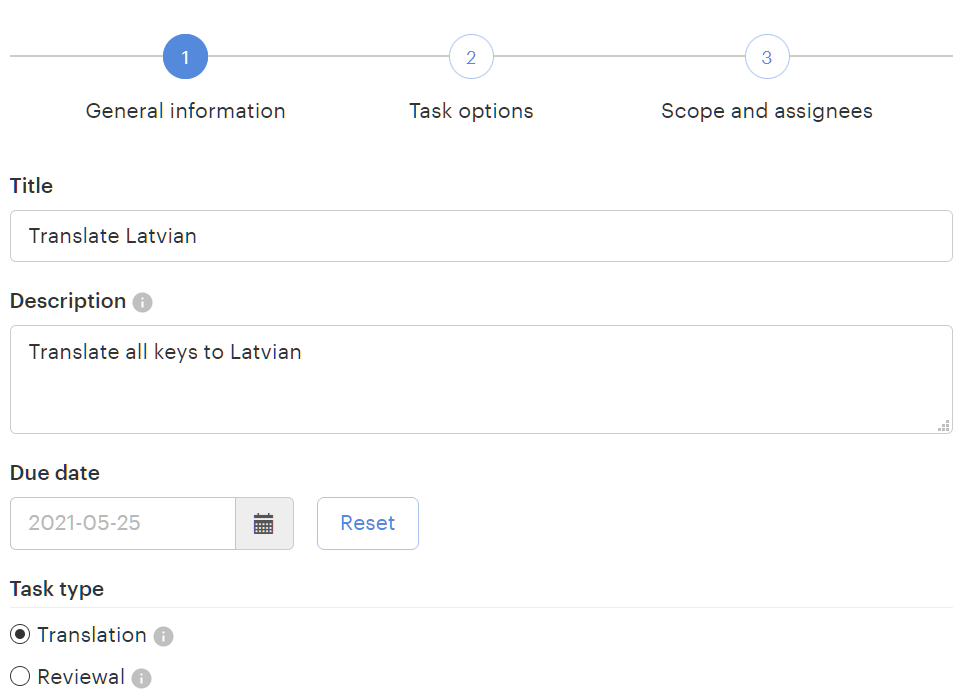 Proceed to the Task options step and enable Allow for this task to be used as a template option. Enter the template's name in the text field below:

Proceed to the third step, set up task scope, languages, and assignees as needed. Create the task and your template is ready!

Now, when creating new tasks you will see a Create task from template dropdown on the General information step:

Choose a template, and general information will be automatically populated for you. It may be adjusted as necessary: 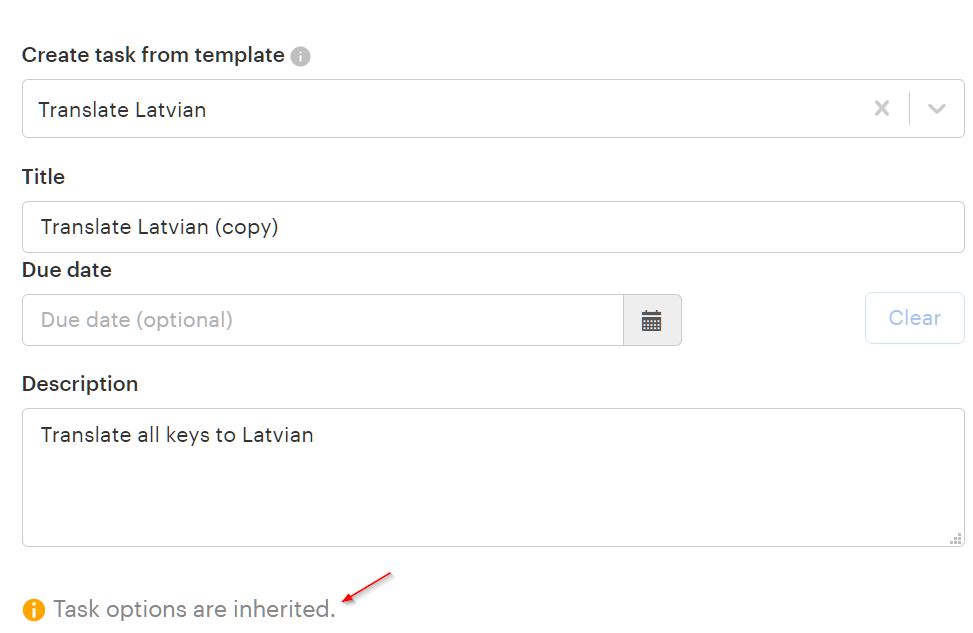 Please note that Task options will be locked and you will not be able to modify them:

Target languages and assignees will also be inherited but the scope can be changed as needed: 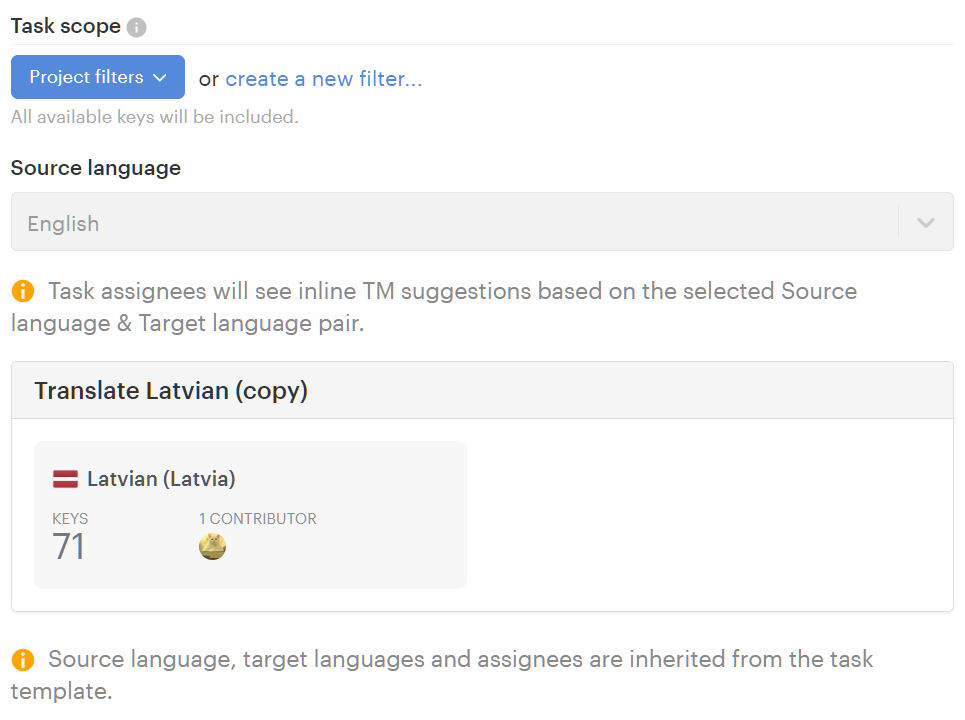 Template-based tasks have a special notice in their description saying which task was used as a template: 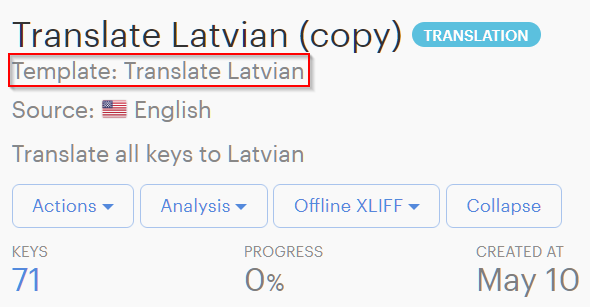 You can also create a single task template containing two chained tasks (translation and review). To achieve that:

Once you assign a task to contributors, they receive notification email along with the notification in their Incoming task widget. 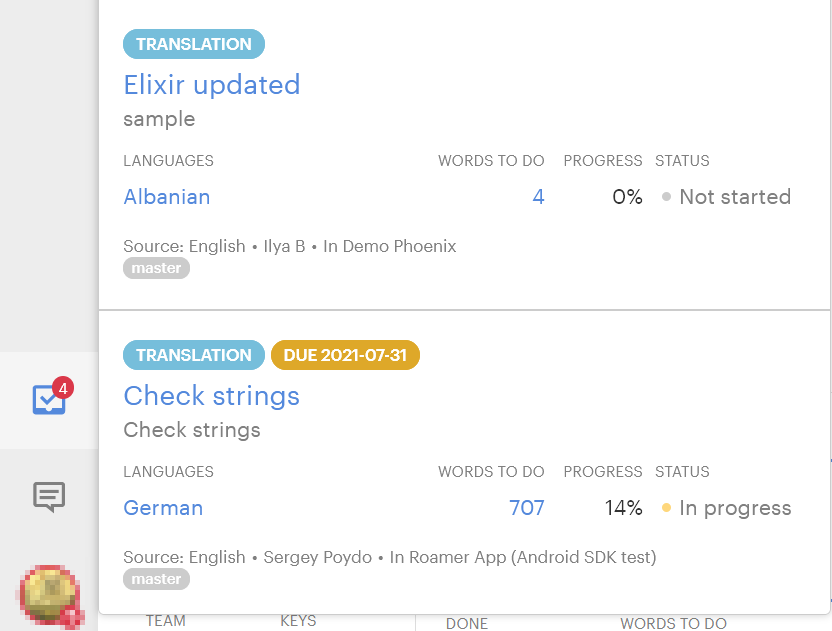 The translations (items) that are included in the task have a status of completed or uncompleted. This status is changed either once a translation is updated or by clicking the status icon in the editor manually. You can learn more about other translation statuses in the corresponding doc.

Please note that if the Auto-mark items as completed on edit option was disabled during the task creation, users will see two buttons:

If you have not enabled the Auto-close languages switch when creating a task, the contributors have to mark languages as done when they are 100% completed. Once a translator marks language as completed (using the Incoming task widget), project admins will receive an email notification.

As all languages are closed (marked as completed) project admins may close the task to archive it. If the auto-close task option has been selected during the task creation, it will be closed automatically.

We've added two new preset filters in the project editor to allow you and the translators to quickly access the required keys in the editor. The Uncompleted items filter shows keys still to be done within the task (ones with the uncompleted status). The All items filter shows all task keys regardless of their status. 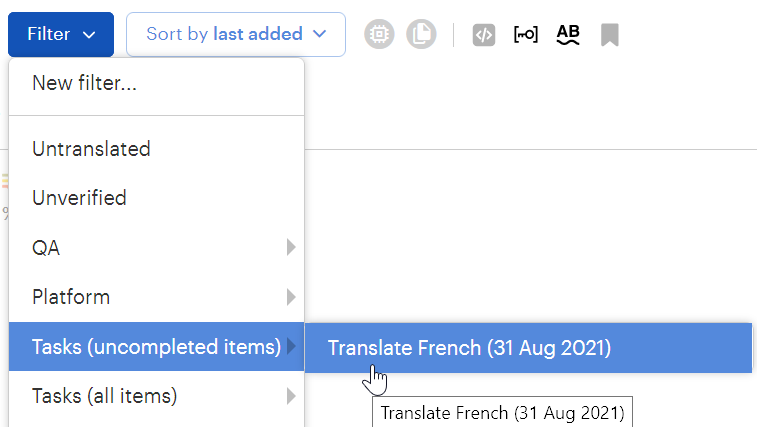 On top of that, you can filter the task themselves on the Tasks (not in your project editor!) page. To achieve that, click the Filter dropdown and adjust filtering options: 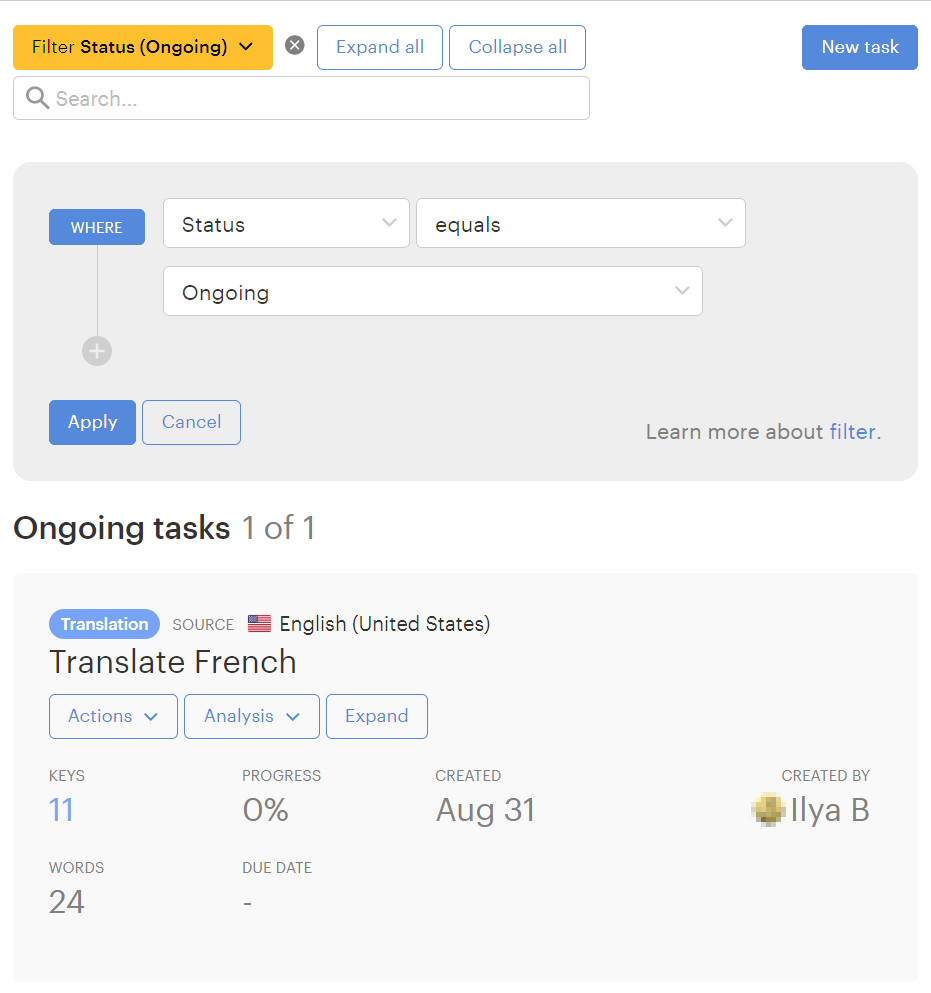 When simply click Apply. In the example above we've chosen to display only the active translation tasks.

Task assignees will see inline translation memory (TM) suggestions based on the source and target language pair selected in the task scope. After they translate the strings within the assigned task scope, new entries will be added to the TM based on the task language pair as well. For example, if the source language is French, and the target is German, then the TM entry will have French set as a base language, and German as the target.

Please note that you should not expect to see these TM suggestions in other projects. Specifically, these entries won't be shown if a project has a base language other than the source language of the task.

Check the Translation reports and word count to learn how we calculate the word count and how to read detailed user reports.

It is possible to browse analysis in Excel format for every task. To achieve that, proceed to the Tasks page and click on the Analysis dropdown under a certain task: 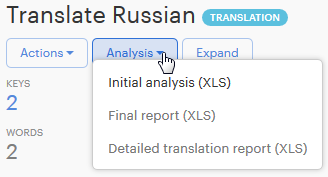 There are three types of reports available: 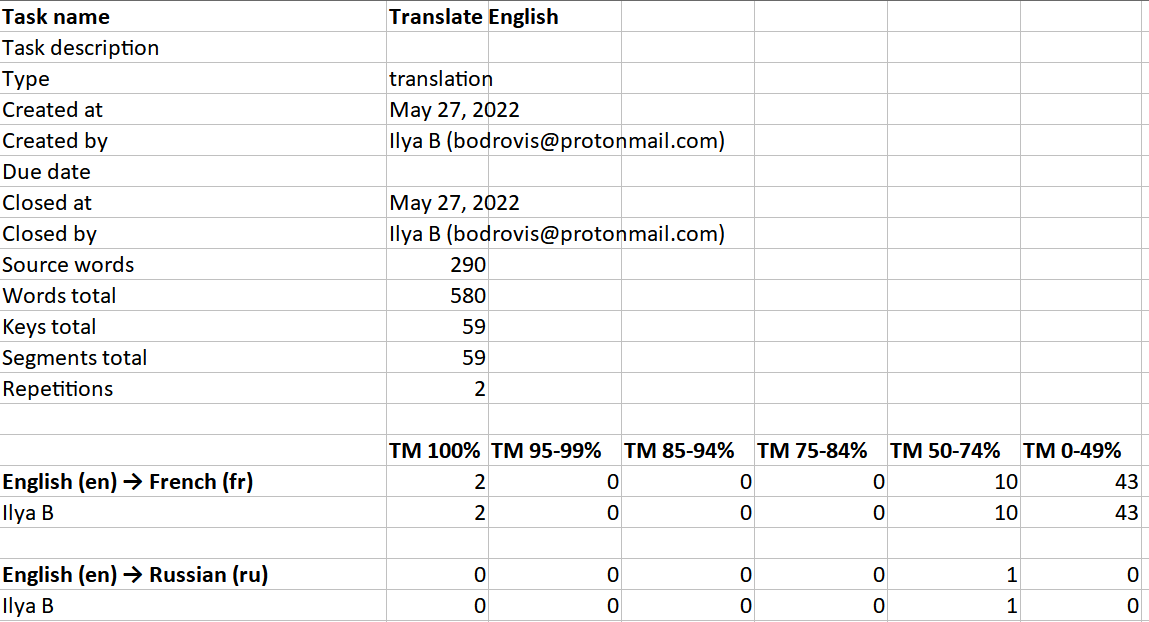